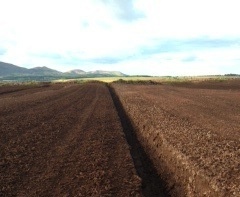 I would wager that the subject of peat barely registers in the public consciousness, let alone merits thinking time.

Which is why I was delighted to see a story about a new peat bog discovery in the Congo, prominent on the BBCs website's homepage. The story has made it to the top five leaderboard of most read stories today. All the more relevant as I am with Afri-Flame academic partners, talking biogas and soil carbon enrichment.

Peat preservation is one of the keys to stabilising the planet's atmosphere. According to Wetlands International, carbon-rich peatlands contain twice as much carbon stock as the entire global forest biomass (approximately 550 billion tonnes (gigatonnes) of carbon). They exist through large swathes of the northern hemisphere, from Alaska, through the Siberian tundra, to eastern China, and equatorial regions.

But huge amounts are being lost worldwide to conversion to plantations (for example palm oil in Indonesia) and for agriculture. Scientists are concerned that melting of the Siberian permafrost, caused by climate change, could release huge quantities of methane, itself a greenhouse gas. Closer to home, we have a problem too. Peat is still harvested in Scotland for horticultural use, even in the central belt (image).

The BBC may be guilty of undue prominence for climate sceptics in the past, but Auntie seems to have a growing interest in what lies beneath our feet, and its link to the climate. Could peat's tangible, dark complexity put it in the public eye, and help become its saviour?