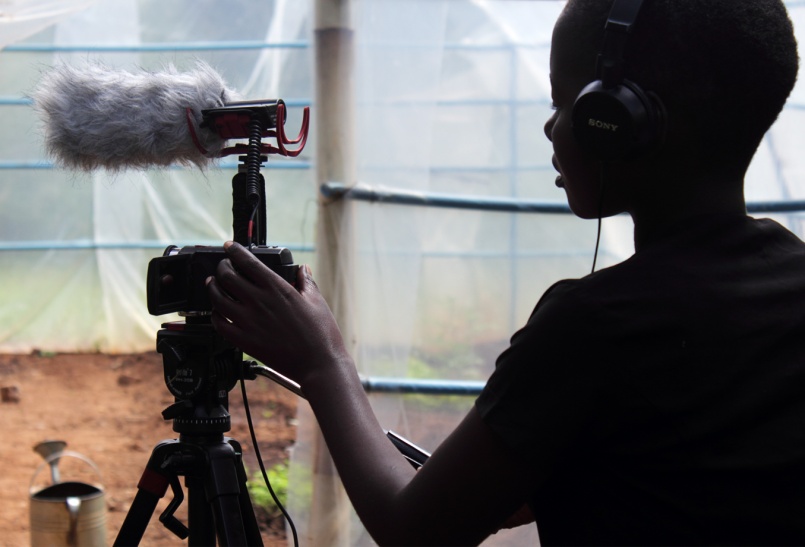 I chucked the video students into the deep end, giving them a very short timeframe and a manual to help them with their facilitation practice.

The critical moment as a teacher is when the students first use their newly acquired skills. I was quite sceptical and nervous. When the coordinators finally returned from their practice session, teaching farmers how to use video equipment, I was greeted with excited smiles of relief, and was proven wrong worrying about their abilities. The clips of their facilitation showed me that they all worked hard, engaged the villagers with singing and dancing and taught the filming games in a calm and informed manner. Despite the short timeframe, the villagers were able to film their own sequences and stories and the coordinators learned a great deal about facilitation and preparation of workshops.

It’s already 3 months since the latest installment of participatory video trainings took place in Lilongwe with our Malawian partners at Kusamala Institute of Agriculture and Ecology. The ten CSA coordinators, who underwent an intensive three-month training in permaculture techniques, also learned how to plan, film and edit short videos. Furthermore the training also prepared them to facilitate their very own participatory video workshops within farming communities.

This proved exciting for our enthusiastic group of coordinators. Not only did they get to practice several video and sound techniques, storyboarding, engaging games and songs while creating short instructional films of their permaculture knowledge (see below), but I also sent them off to a practice-facilitation to test what they have learned on the ground.

We are now looking forward to seeing more such workshops happening in Dowa district, this summer and beyond. We hope that by engaging the farming communities in storytelling and videomaking, we can raise awareness and create discussions about the changing climate and its impact on fragile farming communities in Malawi. We want to encourage these villagers to take their lives into their own hands, find their own solutions to problems, question the readily available ‘magic’ of fertilizer companies and adopt sustainable farming techniques that create good crops, without a carbon-intensive impact on the environment.

I’m looking forward to my next journey to Malawi to organise village screenings with the films that have been made, getting more discussions rolling and hopefully seeing the newly acquired techniques in action.

We will be sharing these stories here on our blog in the coming months. You are invited to check out the instructional permaculture videos that our CSA coordinators created during their PV training in April!

Sabine Hellmann was trained in Participatory Video Facilitation by InsightShare in Oxford, who are the unprecedented PV pioneers in Britain, working with numerous NGO’s and communities for 15 years.